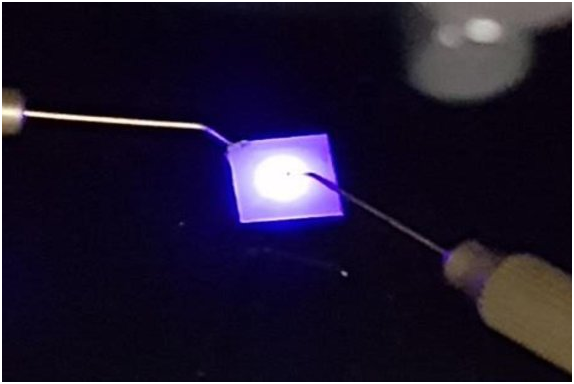 A group of Korean scientists has built up a new LED material that can supplant gallium nitride in producing blue light LEDs. This technological breakthrough was made while Korea has been stepping attempts to lessen its reliance on Japan in the material and parts sectors.

The Korea Institute of Science and Technology (KIST) reported on March 8 that a KIST group has succeeded in developing a new compound that can supplant gallium nitride in creating blue light LEDs. The study was published in the most recent online edition of the Scientific Report, a sister report publication of Nature.

The group created blue light using a copper iodide (CuI) compound, which is made by synthesizing copper and iodine. “We have found that copper iodide semiconductors can emit blue light which is more than 10 times brighter than that of gallium nitride-based devices. They also excel in photoelectric efficiency and long-term device stability,” the team said.

LEDs need red, green, and blue LEDs to create white light. Japan has built up a strategy to make high-quality gallium nitride to create blue light LEDs, which are used as a core gadget for cell phones, displays, electronic products, and high-frequency gadgets.

The copper iodide semiconductor created by the scientists can develop on low-cost silicon substrates with small imperfections, so it has the benefit of using the large-size silicon substrates (300 mm), which are right now commercially accessible. Also, the copper iodide flimsy film’s development temperature is like the temperature used in silicon-based procedures (below 300 degrees Celsius), so copper iodide thin films can be deposited without sacrificing performance. In this manner, it tends to be applied to a low-cost and simple silicon semiconductor process.

These research results are huge in that the study demonstrated new semiconductor material technology using a copper halogen compound for the first time in the world by developing high-quality copper halogen single crystal copper iodide on a silicon substrate and realizing high-efficiency blue light emission.